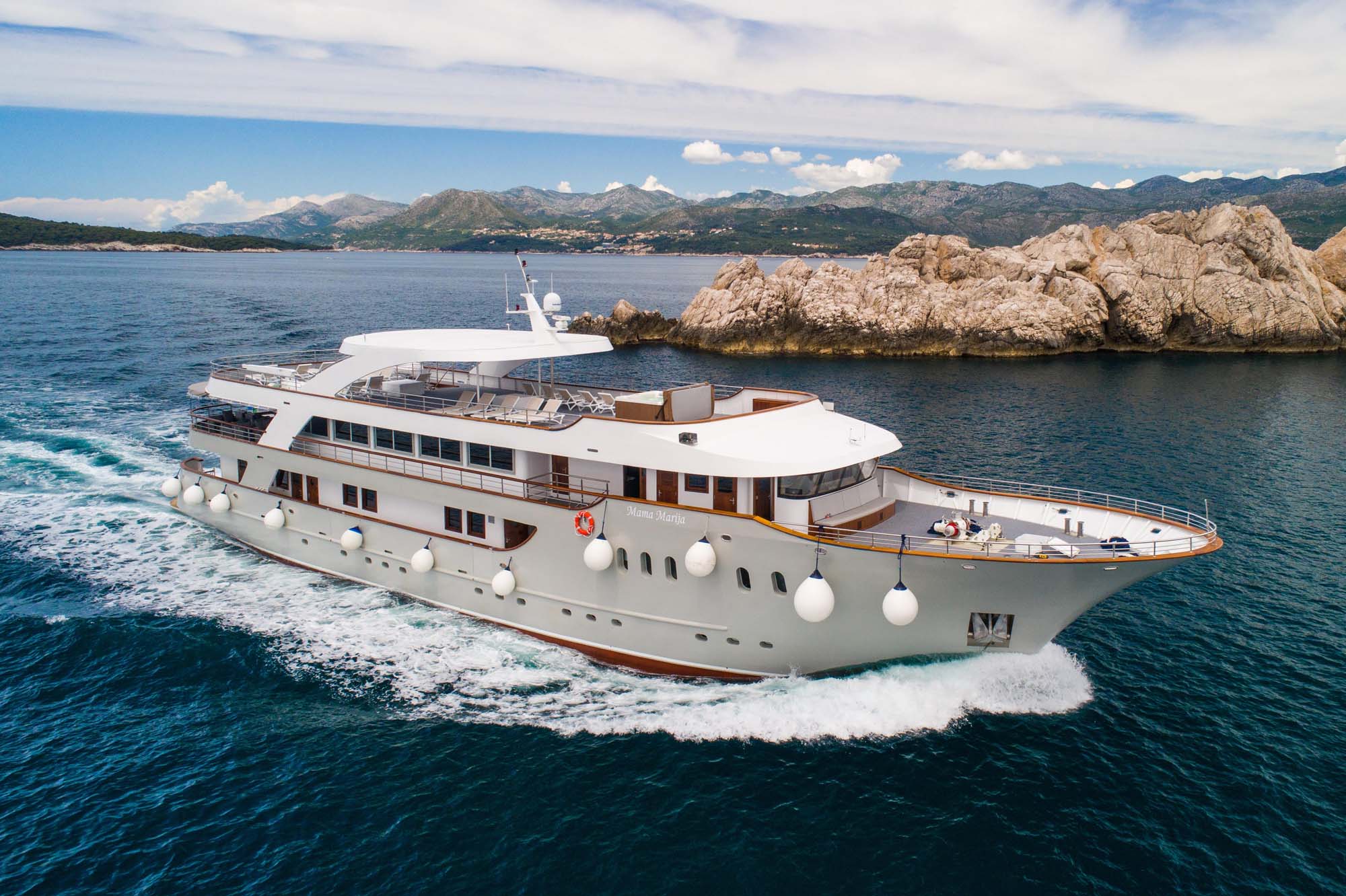 The ship will be docked in Dubrovnik Gruž harbor where you can board during the entire day. At 7 pm we’ll have a welcome meeting where Captain will introduce you to the crew and your fellow passengers. Welcome dinner will be served at 7.30 pm. The embarkation is possible throughout the whole day. Passengers arriving in the morning will not be able to enter their cabins before 1 pm but can leave luggage on board. Captain will wait for all the passengers arriving late at night. All the late-arriving guests will be provided with dinner.

After breakfast our English speaking guide and coach will come to the pier. We’ll visit the historical centre of Dubrovnik, the famous city enlisted as UNESCO’s World Heritage Site, where your guide will show you the most interesting sights of Dubrovnik. After the city tour, you’ll be left on your own to explore around, visit City Walls or take a scenic cable car to the top of Mount Srđ with its stunning 360° vista. On this day, we’ll not have lunch on board, so you can spend more time in Dubrovnik and see why this city was deservedly nicknamed Pearl of the Adriatic. The return coach transfer is scheduled between 3 pm and 4 pm (time to be confirmed on the spot). Then we’ll sail out for the Island of Šipan where we’ll anchor in a picturesque and peaceful fishermen’s village of Šipanska Luka. In case dock and lock schedules or weather conditions prevent us from anchoring in Šipanska Luka we’ll cruise to Slano, located on the mainland. This night we’ll have dinner on board.

Overnight in Šipanska Luka or Slano on the mainland, (B, D)

We start our day with morning departure towards the Mljet National Park. You will have just enough time to explore park, to walk around the Great and Small Lake and Islet of St. Mary with its Benedictine Monastery from the 12th century and, of course, to take a swim in the heart of National Park. Entrance fees to National Park Mljet are included. Lunch on board and cruise toward the island of Korčula. In the afternoon arrive to Korčula town, on Korčula Island, city known as a birthplace of Marko Polo, the famous explorer. Our English speaking guide will take you for a tour of Korčula Town, through its narrow and cobbled streets and its rich history. The rest of the evening is free to enjoy dining at one of the local restaurants of your choice. Overnight in Korčula Historical Town, (B,L)

In the morning we’ll cruise to the Island of Vis, with lunch onboard and a swim stops en route. Arrival to Vis is scheduled for the afternoon. Compared to other Adriatic islands, Vis is rather unique. Being an important strategic military stronghold for centuries, Vis was spared the

Today is cruise to Island Bisevo with its Blue cave. The cave has its own natural entrance which is located below sea level, which required that it visitors dive deeply only to resurface into the cave’s mysterious blue depths. This natural phenomenon creates a magical effect of deep blue and shiny silver, mystifying her visitors. However, sometimes High Waves prevent the entrance to Blue Cave, which is something we shall not know before the morning designated for our visit. If that happens, we can provide an alternative half-day tour of Vis Island with WWII RAF Airport, along with Komiža – a peculiarly beautiful town boasting the longest fishing tradition on East Adriatic. After swimm stop and lunch we will continue cruising towards the sunniest island of Croatia – the island of Hvar, along of the many coves and bays on the way. Hvar is one of the most popular, very attractive tourist destinations and a meeting point for the international jet set.

Upon your afternoon arrival at Hvar, a local English speaking guide will walk you throughout the town introducing you to the history, culture and way of life on this island and explain how lavender was traditionally farmed on the Island of Hvar for centuries.  Have an evening in Hvar free on your own to explore and dine around in one of numerous family owned restaurants. Overnight in Hvar Historical Town, (B,L)

In the morning we’ll cruise towards Bol, a place best known for its beach of Zlatni Rat (Golden Cape), which regularly hits the top lists of the most beautiful European beaches. Once we stop in Bol, you can enjoy simple pleasures such as taking a walk around this nice little Dalmatian town, perhaps having a cup of coffee or a swim, until lunch is served on board. After lunch, we’ll continue cruising towards Trogir, another city inscribed on the UNESCO World Heritage list, arriving there during the afternoon. This town – museum is literally packed with palaces, churches, monasteries, and towers, the main attraction being the Cathedral of St. Lawrence, probably the finest example of sacral architecture in Croatia.

A professional English speaking guide will take us for a city tour of Trogir. Afterward, you’ll have some time on your own, free to explore. On this evening we’ll have Captain’s Dinner on board, along with some live music entertainment.

Morning cruise to Split, our last port on this cruise, with swim stop along the way. Lunch and afternoon Split City tour. Our English-speaking guide will show us Split historical Diocletian’s Palace.

Split is the second largest urban centre in Croatia and the seat of the Split and Dalmatia County. It is traditionally considered to be over 1,700 years old. Since 1979 the historic centre of Split has been inscribed on the UNESCO World Heritage Site List.  The historical and cultural buildings are located inside the walls of the Diocletian’s Palace.

After city tour you will be left on your own to explore the city and have intimate farewell dinner on your own.

It is time to say farewell to all your new friends after having breakfast. (B)

Rates do not include

Upon confirmation of reservation a 300 EUR deposit per person is required (non-refundable) and balance payment to be paid 60 days before arrival. 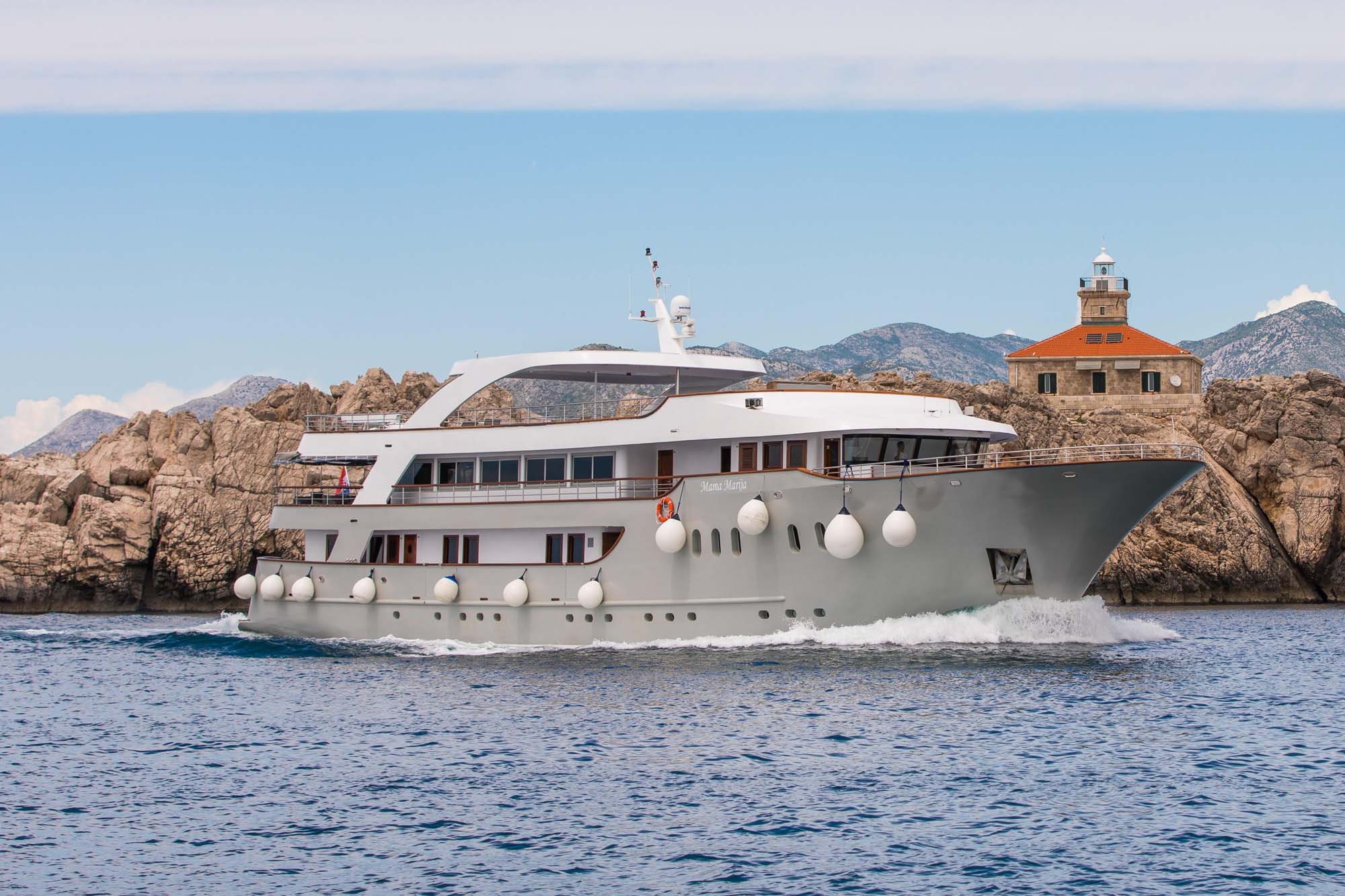 Learn more about the ship

Meet M/S Mama Marija, our flagship. A perfect choice for the ultimate island-hopping cruise in Croatia, M/S Mama Marija will satisfy all your refined cruise expectations.