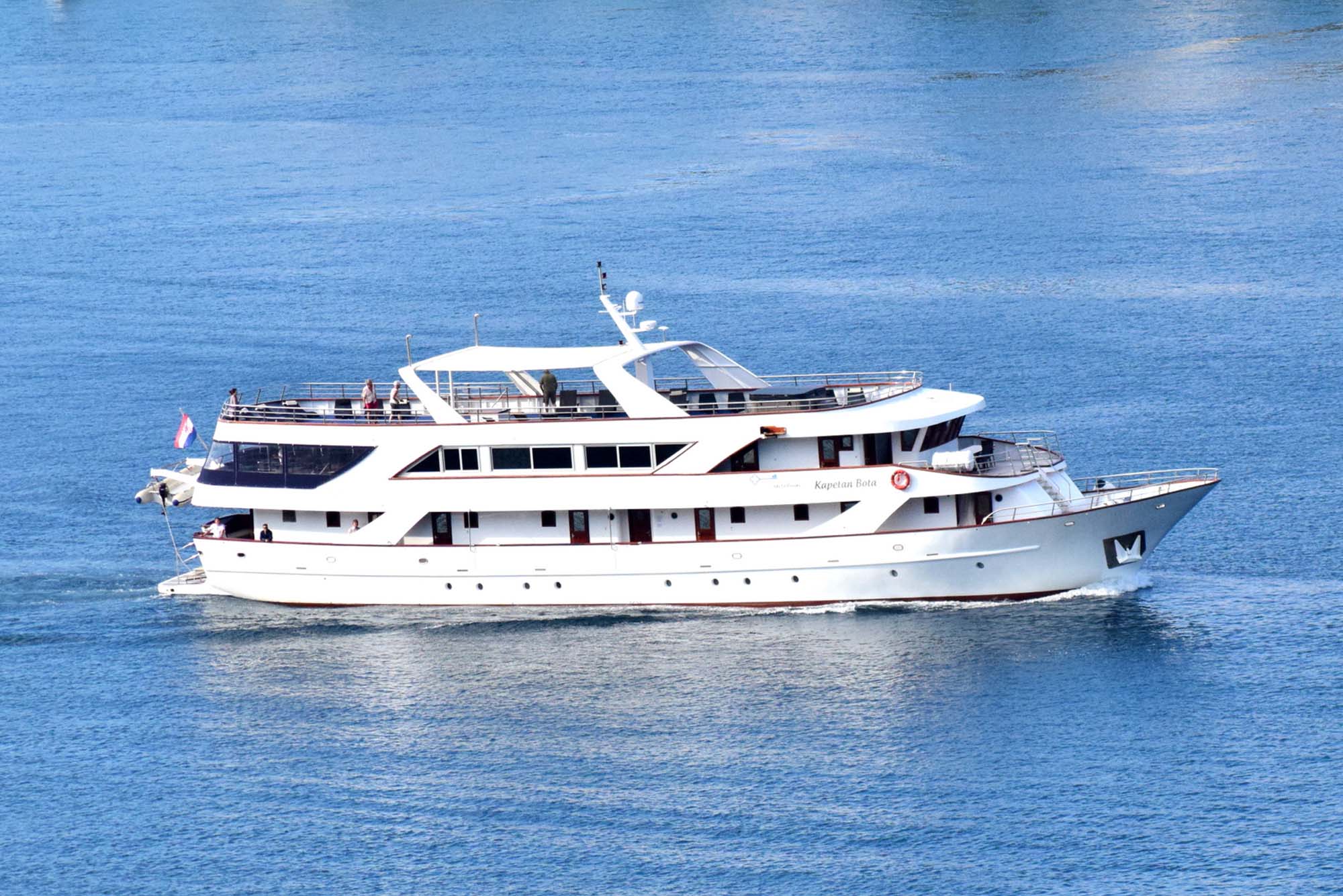 Luxury cruise among the southern islands of Croatia.

M/S CAPTAIN BOTA will be docked in Split harbour where you can board during the entire day.  Welcome meeting will start at 7:00 p.m. where you will be introduced by our Cruise director to the Captain, our crew and of course your future fellow passengers with whom you will spend a week on board.

The embarkation will be possible throughout the day; passengers arriving in the morning cannot enter their cabins before 1:00 p.m. but they can leave luggage on board. Captain will wait for all passengers arriving late at night and these guests will be provided with dinner.

We start our day with morning departure towards Bol, said to have the best beach for swimming in Croatia named Zlatni Rat. (Golden cape).  We will stop in Bol and enjoy this nice Dalmatian town for a walk, or to have a cup of coffee and take a swim till lunch is served on board.  After lunch we will continue cruising towards the sunniest island of Croatia – the island of Hvar, along of the many coves and bays on the way. Hvar is one of the most popular, very attractive tourist destinations and a meeting point for the international jet set.

Upon your evening arrival at Hvar, a local English speaking guide will walk you throughout the town introducing you to the history, culture and way of life on this island and explain how lavender was traditionally farmed on the Island of Hvar for centuries.  Have an evening in Hvar free on your own to explore and dine around in one of numerous family owned restaurants.

We start our day with morning departure towards the island of Mljet with a swim stop along the way. Lunch will be served on board while cruising to Mljet National Park. Upon arrival to the Mljet National Park, you will have a free afternoon to explore park (entrance fees are not included), to walk around the Great and Small Lake and Islet of St. Mary with its Benedictine Monastery from the 12th century.

We will have Captain’s dinner that evening on board.

After breakfast, we depart for a pleasant cruise along the shores of Mljet and the Elaphite islands where we will have a swim stop and lunch arriving in Dubrovnik in the afternoon. Our own English speaking guide and coach will come to the pier. After an organized transfer, we will arrive at the historical centre of Dubrovnik, the famous city enlisted as UNESCO’s World Heritage site, where your guide will show you the most interesting sights of Dubrovnik. After city tour, you will be left on your own to explore the city, visit City Walls or take the cable car to the top of the Mount Srđ. The return coach transfer is scheduled in the evening or you can return on your own.

You will see why this city is called the Pearl of the Adriatic.

After breakfast, we will start our cruise to Korčula Island with a swim stop. Lunch on board and afternoon arrival to Korčula town, on Korčula Island. Korčula is a city known as a birthplace of Marko Polo, the famous explorer. Our English speaking guide will do Korčula City tour, and walk us through narrow and cobbled streets. The rest of the evening is free to enjoy dining at one of the local restaurants of your choice.

Our voyage will continue towards Makarska with refreshing swim stops on our way passing by Pelješac Penninsula and its picturesque places on both sides, green with the olive and pine groves, vineyards and the low bush forests and Eastern side of Hvar Island.

Lunch on board “en route” and afternoon arrival to Makarska on the mainland, “tourist Centre of Dalmatia” famous with it’s long beaches and nightlife, where we will spend the night.

After breakfast we cruise across the Brač channel towards Pucisca.

Pucisca is the island’s biggest village of the island of Brač with authentic Mediterranean architecture and rustic ambiance inside a deep fiord; shiny and white stone facades rising amphitheatrically uphill make this place so unique and worth seeing, famous for its quarries from which stone was excavated to build limestone columns of the White House in Washington DC, The Parliament house in Vienna and many other famous buildings all over the world.

In Pucisce is only one Stonemasonry school in Croatia where students carve Brač limestone with traditional and unconventional tools that are used here for centuries.  After a relaxed walk we will have lunch while cruising to Split, our first and last stop.

Split is the second largest urban centre in Croatia and the seat of the Split and Dalmatia County. It is traditionally considered to be over 1,700 years old. Since 1979 the historic centre of Split has been inscribed on the UNESCO World Heritage Site List.

The historical and cultural buildings are located inside the walls of the Diocletian’s Palace.

Our English speaking guide will do afternoon Split City tour, and walk us through historical Diocletian’s Palace.

The whole area is rich with vegetation as well as birds and fish. Due to new strong preservation laws, this extraordinary area has been kept in its original pristine state.

From the boat we will depart after lunch, arriving there around 3.30 p.m.

Walk through National Park, Skradinski buk waterfall, the longest waterfall on the Krka River, as one of the best known natural beauties of Croatia.  Walking part will be ended at The Skradinski buk Ethno Village at Krka National Park recently received the prestigious Golden Flower of Europe award in a competition among several thousand sites. Return by scenic road from Krka to Split, arriving to Split through Golden Door, where we will have orientation Split City tour ending our journey at our ship.

Reservations and payment on the spot.

It is time to say farewell to all your new friends after having breakfast. (B)

Rates do not include

Upon confirmation of reservation a 300 EUR deposit per person is required (non-refundable) and balance payment to be paid 60 days before arrival.

Learn more about the ship

Constructed in 2015 and complying with the newest European cruise ships standards, M/S CAPTAIN BOTA is a part of our growing and versatile fleet of small cruise ships. M/S CAPTAIN BOTA is a luxury yacht made to satisfy all of your refined cruise expectations, featuring state-of-the-art navigation and safety systems, fully equipped comfortable air-conditioned cabins with private facilities, Wi-Fi, restaurant, bar, sun deck, elegance rooftop Jacuzzi, swimming platform and much else.